The two sat for what seemed like hours, staring at each other, unwilling to surrender what they each felt was rightfully theirs.

Last weekend, Gloria and I went to Dallas to attend a friend’s wedding. We didn’t know anyone there except the couple, but that detail quickly lost significance as we witnessed a beautiful ceremony, celebrated our friend’s marriage and met new friends. The welcoming and glitzy reception, complete with the wining and dining one would except in this part of Dallas, didn’t hurt either – a mac and cheese bar, medium rare steaks, salmon with miso sauce. I obviously paid more attention to the food. My wife really enjoyed the tiered flower arrangements.

The wedding festivities came and went quickly as they always do. Life returned to its regular fall rhythm for me, Gloria and the other wedding guests. The next morning, my family and I went to church. We heard a great sermon on forgiveness. Soon after, we made our way to the mall. It was back-to-school and Labor Day shopping weekend. I really should have known better. All too familiar with shopping in these suburbs I grew up in, I turned into the parking lot and immediately started zig-zagging in search for a spot. Several minutes passed in this mundane routine when finally, a car reversed out, giving me access to one of the most coveted spots: a covered garage parking space, only one row away from the entrance of the mall. I parked and took my place among the lucky and suddenly elite shoppers that day.

But another unfolding scene had captured my attention, temporarily squelching the excitement I normally would have had at my luck. One row over, two cars sat still, facing each other. A truck and a mid-sized sedan, both partially in-process of parking in the same space, both refusing to surrender to the other. The drivers sat and glared at each other, reticent, angry and convinced. I guess the promise of elite status can produce behavior such as this. My brother, Gloria and I walked into the mall.

5 minutes later, I still couldn’t shake the image of these cars and individuals from my mind. I wondered – are they still sitting there? Being a nosy Asian, I walked back. Gloria imagined, “I bet you what happened is that both of them didn’t get it! It’s like Solomon and that baby.” We passed through the double doors and were hit by a wall of summer heat waiting for us outside. A few feet in front of us, security guards were beginning to leave the scene. Like a clairvoyant, Gloria was right. The spot was empty, and both cars were asked to leave.

This remains the one and only time that I have ever seen two people so committed to a parking spot – it was rightfully their own, not someone else’s. You might have just painted both of their names on the concrete.

Then it occurred to me – I’m really no different. How often have I looked at someone else’s stuff and wanted them for myself – new cars, higher paychecks, a cool yard. How often have I tried to fight for a parking spot, making sure that my signal is flashing for all to see – that’s mine! Growing up and reading stuff like Le Petit Prince, you never think that you’ll be those guys. You want to stay the wise child, untainted by consumerism, greed, covetousness, mindless busyness. But one day, you start seeing those very things emerge from inside of you, oozing out like bacteria that’s been trapped underneath your skin.

But praise God for the Gospel. In Christ, our damaged humanity is healed. In Christ, we come to recognize that all things belong to Him, “for every animal of the forest is mine, and the cattle on a thousand hills.” (Ps. 50:10). In Christ, we are the children of God, entrusted as stewards to bless others with what we may “have,” for all things are His. In Christ, we can rest secure and cease striving for the next thing. What freedom and what joy is ours when we know God as Creator, Sustainer and Giver of all good things.

Now, I just need to remember that I don’t own the roads or the parking lots at Costco. 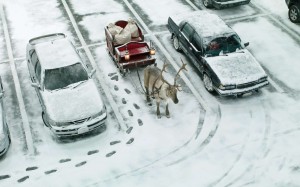